Each lifecycle state has paths that guide the change through the workflow. Each path can be enabled or disabled according to certain built-in rules, and each path can also have certain groups of users notified as the change moves along that path. Perhaps the simplest way to set the workflow is to ask these questions:

In the Primary discussion text template, you can specify a prompt that will be inserted for the change form's originator. If you do not want any prompt copied to a new change form, leave the box empty.

Although configuring other change forms, such as the Change Request, is substantially similar to the Change Notice, the critical difference is in two checkbox settings on the Attributes tab:

Although other change forms may use starting and ending boundaries, these values are especially relevant to temporary change forms, such as a Deviation or Stop Shipment. On the Attributes tab, note that you can enable fields for a starting date and/or serial (or lot code) number, as well as for an ending date, serial number, and/or total permitted quantity. 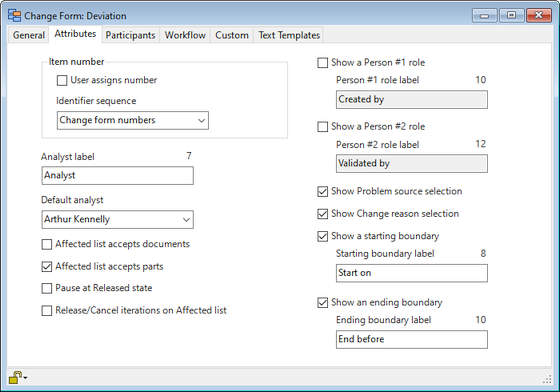 In the case of a Stop Shipment form, you may want to enable only the ending boundary. The beginning boundary can be enabled if you want it explicitly set, but the implied value is "immediately". Set the label to Resume shipments on or a similar indication of when a resolution should be expected.

This application note was relevant to the PDXpert software release that was current at time of publication. Product changes since that time may affect its utility. We'd be happy to assist you in assessing the applicability of this note to your situation.

Working with other software applications