This help topic describes the current PDXpert PLM release. Earlier releases may be different. To view your release's version of this topic, open PDXpert and press the F1 key or select the Help menu.

Change forms should be Completed, Canceled or Rejected before editing their related Change Forms member. A new change form's workflow, participants and some collection member attributes are copied from this template to the change form. New settings may not affect previously-created change forms, or may have unexpected results.

Other users should not be using the system while you're working. Close all item records in your workspace before you begin. Close the PDXpert client and start it again when you've finished.

Some data fields show a character counter in the upper right of the box. This is helpful for editing a custom label, and for data that may be exported to other systems that limit imported text length.

Name §
This is the complete name for the change form, such as Change Notice or Production Deviation.
Display name §
The abbreviation is used extensively in identifying the change form. This is typically CN, Dev and similar industry terms (up to 10 characters in length).
Description §
This gives the change form and its purpose.
Show Files list §

When this checkbox is marked, the Files list is visible. Files and external links can be added to the change form.

If any files have been attached to change forms, and then this checkbox is cleared, the Files list – and attached files – is hidden. The files are not deleted. To ensure visibility and access, this checkbox must remain marked after it is set.

These settings define how the change form's Number is assigned.

Specify the change number generator for the change form. This selection is disabled if the User assigns number is marked.

You can choose a single identifier sequence for all ECRs, ECNs, RFDs, etc., or you can designate a separate sequence just for ECRs, a different one for ECNs, etc. For more information, refer to the Sequences: Identifier collection.

Use a single identifier sequence for all change forms. You'll avoid confusion between overlapping change numbers, such as ECR 1234 and ECN 1234.

Analyst label §
This textbox lets you match an analyst's role to the change form. For example, the analyst for a design change may be labeled as Design Analyst while the analyst for a purchased part release is Component Engineer.
Default analyst §
This dropdown list box lets you select an analyst for the change form. The default analyst can be overridden when the originator makes a new change form. If the selection is empty, then the change form's analyst is (a) the originator if that person has an analyst role; or (b) any other person who has an analyst role; otherwise (c) the super administrator. Changing this value will not affect change forms that have been created.
The persons in the list have a Roles collection member that includes Is an analyst. If you later remove the analyst role from this person, update this value with a new analyst.
Affected list accepts documents §
Affected list accepts parts §
When these checkboxes are marked, items of the specified class may be added to the change's Affected list.
Pause at Released state §

When this checkbox is marked, the accepted change is stopped at the Released state before it can be moved to Completed. The Product Team attributes can be edited and items on the Affected list can be dispositioned. After the released data is updated, the analyst can move the change to the Completed state, where it's locked.

If this checkbox is not marked, then the system immediately moves an accepted change to Completed without pausing at Released. Workflow notices are sent only to the email recipients specified in paths 14 and 24 (all email checkboxes for path 25 are cleared).

When not marked, the change form shows a future intent (like a Change Request) or temporary status (Deviation, Waiver, Stop Ship) to change an item. It doesn't have any effect on an Affected item.

Show iterations on Affected tab §
Mark this checkbox when you want item iterations to be shown on, and affected by, the change form (notably, releasing and/or canceling iterations using a change notice). Clear the checkbox to provide a general notice about the item, regardless of the iteration (for instance, a Change Proposal or Stop Shipment).
Show releasing/canceling icon §
When this checkbox is marked, the Affected list shows each iteration as getting Released or Canceled. When cleared, the released change won't affect the affected item's release status.
This checkbox is automatically marked for executing changes. It's always cleared for information change forms (e.g., change request/proposal, waiver, deviation, stop ship).

This checkbox shows a principal person for the change form. For example, you may want users to identify the responsible creator, such as design engineer, on the change.

If this checkbox is cleared, then the person #1 dropdown list isn't shown on the change.

The textbox lets you label the person's responsibility. For example, you can use Design Engineer as the label on the change.

This checkbox shows another principal person for the change form. For example, you may want to identify the responsible user, such as project manager, on the change.

If this checkbox is cleared, then the person #2 dropdown list isn't shown on the change.

The textbox lets you label the additional person's responsibility. For example, you can use Project Manager as the label on the change.

When this checkbox is marked, user can view and modify the change's starting date and/or serial number fields.

Starting boundary label §
This value is shown to identify the starting date as, for example, Begins on.

When this checkbox is marked, user can view and modify date, total quantity and serial number fields that show the change's duration or limit. Specifying a completion or expiration point (date, serial number or quantity) is often required for advisory changes, such as deviations and stop-ship orders.

This value is shown to identify the ending point as, for example, Ends after or Resume shipments.

Clearly indicate whether the change period ends before, or after, the date entered by the change author.

The Reviewing groups list shows who is responsible for reviewing a routed change form. The list is copied to each new change form, where the groups and email order can be edited further.

If there's no one listed on a group's Persons list, then the group can't be added to a change form's Reviewing groups list. Read more about reviewing groups in the Groups: Change form reviewers help topic.

Add to the Reviewing groups list by dragging a group from the Groups collection on the Collection Explorer.

To delete a reviewing group: select the row ► , and press your keyboard's Delete key.

Persons with valid email addresses, even those without a user log-in account, can receive email notices during the change workflow. You can designate when these observers are informed of a change's progress using the lifecycle states map in the Workflow page. This list is copied to a new change form, and can be further modified on each change form.

Delete an observer by clicking on it, and then pressing your keyboard's Delete key.

The workflow map enables workflow paths between a change's current state and the next enabled state. The map also specifies which groups of users are notified as the change moves through the approval workflow.

The workflow diagram shows all possible lifecycle states. For each lifecycle state, you can (a) enable or disable the workflow paths to other states; and (b) identify the user groups that should receive an email notice when the change moves to that state.

Workflow diagram paths §
Workflow paths are buttons 01 to 25. To enable a path between two workflow states, click on the path button, and set the Enable workflow path checkbox. If you disable a particular path, then the change can't move to that lifecycle state. The originator and the analyst are shown on the change form's General page.

Send emails to: §
Mark the corresponding checkbox to identify the parties who are notified when the change moves to a different lifecycle state.

PDXpert distinguishes between two categories of changes. Executing changes (like change notices) will affect the status of documents and parts listed on them. Executing changes cannot be routed if the system finds a problem with an affected item, such as canceling an iteration that's still on a released parent item. Advisory changes (such as change requests) propose changes, yet even upon release won't update the items on the Affected list. See the Processing a change help topic.

The diagram shows all change lifecycle states. Each change form moves from one state (say, Originated) to a different state (Routed) along an enabled workflow path (path 03). When the change moves, it can notify persons affected by the new state. 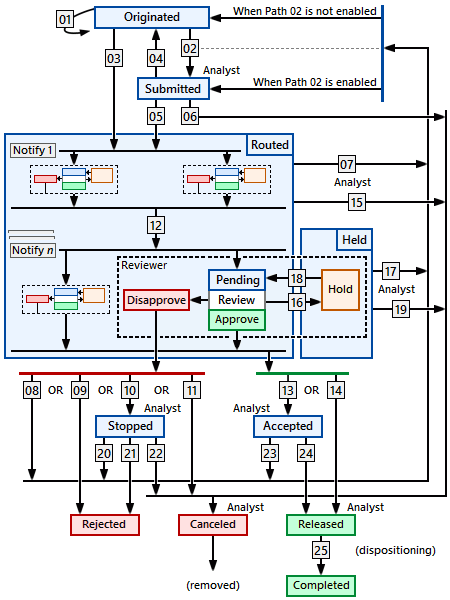